How to Pitch Let It Out with Katie Dalebout 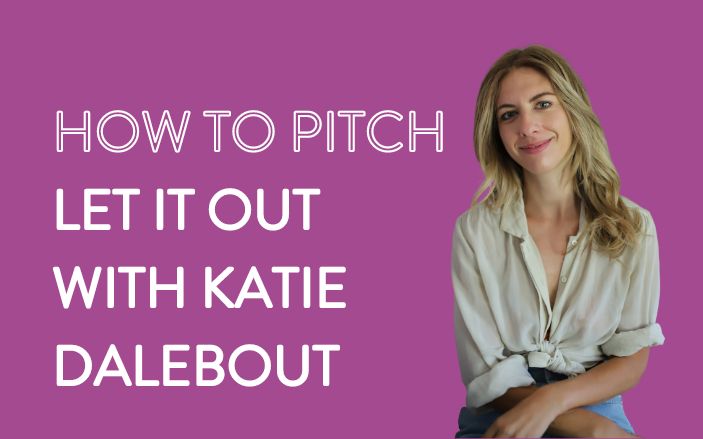 While podcasts like How I Built This or Serial are beloved in part because of tight formats and slick productions, there’s something irresistible about the nature of a show that lets you drop in on an intimate conversation.

Let it Out is a long-form conversational podcast with episodes that can run as long as 2 hours, going against conventional wisdom about how lengthy a podcast episode should be.

And yet, listeners have faithfully tuned in since its inception in 2013, and the podcast now boasts over 4 million downloads.

If you’re a fan of Let It Out now, or are simply looking for a space for an in-depth conversation on topics that matter to you, this “How to Pitch” interview with host Katie Dalebout will help you craft a submission that stands out from the crowd.

In this episode, Katie reveals what she looks for in a podcast guest (and how there is no perfect formula, even after producing 400+ episodes), how she approaches being a guest on other podcasts and how she started helping others start their own podcasts.

Listen to the episode to hear Katie’s do’s and don’ts for pitching yourself to be a guest on Let It Out.

Some podcast interviews create a profile of the guest, focusing on their background and what they’re doing now. That’s not what Katie does.

Her interviews are a snapshot of the guest at a moment in time — the hour and a half that she spends with that person that day. Her podcast is about honesty and vulnerability, and she understands that that’s not for everyone.

“There have been times where I haven’t been able to do that where someone pitched to me and I said yes, when I really shouldn’t have. We couldn’t break through that barrier of this person being like, I’m here to promote my thing,” Katie says.

When guests stick to their prepared responses rather than going with the flow of the conversation, it goes against the purpose of her show.

“Every time I tried to ask a question outside of [what they were promoting] or have a moment of humanness, it really wasn’t met with that. And I think that that’s when [an interview] doesn’t work.”

🎙️ Know the the show format.

While it’s essential that you come prepared to an interview knowing what you want to say, the points you want to hit, and the stories you want to tell, preparing for podcasts is not a one-size-fits-all approach.

Familiarizing yourself with the show and its format is vital. With 400+ episodes under her belt, Katie has had her share of guests who were so focused on the promotion of their work that it interfered with the format of the show and didn’t enable an authentic and vulnerable conversation, which is what Let it Out is all about.

It isn’t just something she values as a podcast host, but also how she shows up as a guest.

“I want to be useful, but I also want to be in the format of the show. When that’s not reciprocated, it’s a bummer,” Katie says.

🎯 Give specifics in your pitch.

Podcast hosts receive a lot of pitches. Katie receives about 10 to 15 pitches per day. If you do the math, this adds up to well over 3,000 guest submissions each year!

“It really is nice when someone says something specific about the show, enough for me to be like, they listened, they know what this is,” Katie says.

It’s common for her to receive pitches addressed to the wrong person or that talk about the wrong podcast, something she doesn’t get upset about because she’s been there too when sending out a large number of emails.

But when pitching a podcast you’re really excited about, she suggests listening to it, providing specifics and giving compliments.

Katie often sends out pitches asking people to come on the podcast, and in the early days, before she had much of an audience, she understood she was asking for people’s time without offering much in return.

“The way I sent those emails was humbly telling them how much their work meant to me specifically, because it did and it was true and it was genuine.”

🗣️ What Katie does: Katie Dalebout is a Los Angeles-based writer, podcast producer, and host. In addition to Let It Out, in 2019 she also founded the podcast Spiraling, a co-hosted podcast about mental health.

In 2016, Katie published her first book; Let It Out: A Journey Through Journaling, which is an interactive guide to journaling. She now teaches journaling workshops, an online class for independent podcasters, runs a digital group for creatives called In-Process, consults, and writes a weekly newsletter.